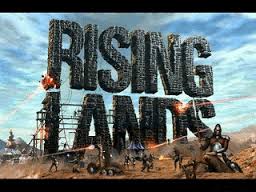 Rising Lands is a Real Time Strategy game released by Microids in 1997. It was my first PC game and a game I have returned to again and again. More and more recent operating systems have made it harder and harder to run the game. It is possible to get it running, but ultimately there are many crashes which make playing frustrating. I have tried many fixes, but nothing provides a complete solution.

As I have been learning Unity I thought I would have a go at writing my own game styled on Rising Lands before going on to write my own independent game.

I have been following an RTS tutorial by Elgar Storm. The tutorial is excellent, in fact one of the best I have been through. The tutorial can be found here. I have been changing sections of this tutorial to style the game after Rising Lands instead of completely matching the tutorial. Much of the game logic required has the basics outlined in this tutorial. I will need to spend some time tweaking it to make it more similar, but for the most part it is a very good basis.

I will make the game available here as soon as it is playable.

If you are concerned about the copyright implications of playing a game created using some of the artwork then perhaps I can put your mind at ease. I have read in a number of places that Rising Lands is now abandonware following Microids going bust. Being sceptical, as I usually am, I tried to dig into this further and find out for certain if the rights no longer belonged to any one. While it does indeed look as though Microids did go bust, they do still exist. The details are sketchy as it isn't something they exactly listed on their news page. I couldn't actually confirm if they do still have the rights to Rising Lands, so as far as I can tell I have no reason to dispute other sites claiming it is abandonware. Since creating Rising Lands, Microids was also bought out by another company. Again, I have no way to check if the deal included the entire company and all its intellectual property.

I have made a number of attempts to contact Microids and its parent company(separately). I was asking if the company did indeed own the rights to Rising Lands. On another occasion I also asked if they had the source code archived somewhere. Sadly, they have not on any occasion replied to any of my messages and I have no way to contact them directly.

For the moment I am assuming that Rising Lands is indeed abandonware and will continue with my game and list it here for download. Should anyone have proof otherwise that this is in some way breaching the copyright then I would be happy to remove the game and remove the related artwork from my code. As the code is all written fresh anyway there is no issue there.